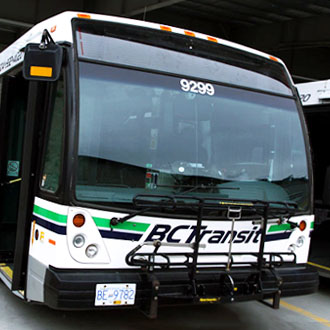 Nova Bus is very proud to have secured an order for 40 buses with BC Transit valued at $18 million. Every year BC Transit connects over 50 million customers in small towns to large urban centres across the province of British Columbia. The delivery of 40-foot diesel buses will begin in 2015.

“Nova Bus is delighted to partner with BC Transit and we are delighted to renew our partnership. In the past, Nova Bus delivered more than 240 buses to BC Transit,” said Jean-Pierre Baracat, President of Nova Bus. “This new contract will add 40 brand new Canadian buses on British Columbia roads and potential for several more in coming years” he added.

Once again, Nova Bus demonstrated its competitiveness and showed that the Nova LFS has adapted to transit authorities’ needs over the years. The Nova LFS includes all the developments of recent years, such as Nova Bus’ unique e-cooling system that reduces the energy demand from auxiliary equipment to maximize buses’ efficiency and significantly reduce fuel costs. The Nova LFS also has bright and stylish interior design that improves passengers’ experience and makes for an easier cleaning routine for transit authorities.

The vehicles will be entirely assembled in Canada and will include a high level of Canadian content. Nova Bus counts on more than 215 component manufacturers and suppliers in Canada and spends 260 million dollars each year in the country.