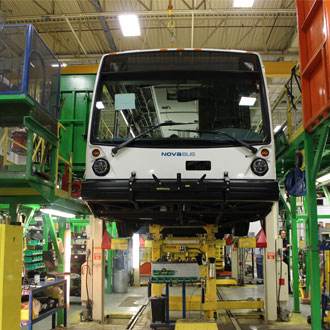 Nova Bus is proud to announce a new partnership with Metrolinx, who coordinates transit vehicle purchasing initiatives for 13 municipalities in Ontario. The agreement includes 27 40 footer buses, with deliveries between 2015 and 2017, for a total value of $11.4 million and 15 articulated buses for a total value of $10 million. In addition, there is an option to reach up to 188 buses representing an order value of $80 million.

“Nova Bus strengthens its position in Ontario with the signing of this major contract. Once again, we demonstrated our competitiveness and showed we best meet public transit needs. Our team looks forward to building a long-lasting business relationship with Metrolinx and is eager to see these new buses rolling in Ontario,” said Jean-Pierre Baracat, President of Nova Bus.

The joint procurement includes 27 buses with deliveries scheduled to start in 2015. In addition there is an option to reach up to 188 40 footer buses to meet demand for future orders until 2017. Since vehicle specifications vary greatly from one city to another, the Metrolinx-Nova Bus agreement comprises various types of propulsion technologies such as clean diesel, diesel-electric hybrid and compressed natural gas.

The vehicles will be entirely assembled in Canada and will include a high level of Canadian content. Nova Bus counts on more than 50 component manufacturers and suppliers in Ontario, with 11 million dollars in spending each year in Ontario alone.